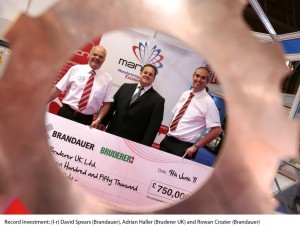 One of Birmingham’s longest established manufacturers is targeting a £10m turnover after announcing major expansion plans.

Brandauer – a world leader in precision pressings and stamping – is celebrating its 150th anniversary in 2012 by channeling £750,000 into two state-of-the-art Bruderer presses which will increase capacity, improve accuracy and open up a host of new markets.

It represents the largest single investment in the company’s history, with the new machines able to produce a staggering 2 billion parts every year – worth up to £2.5m in potential new sales.

David Spears, Managing Director at Brandauer, believes this acquisition marks the next stage of its development:

“2011 has started well and we’re winning new business in both existing and new markets, including exciting orders for complex and larger components for the medical and renewable sectors respectively.

“Turnover has rocketed to over £9m and we have reached a stage where we require additional capability in order to meet anticipated client demand.”

He continued: “We identified the fact we needed machines that could give us greater speed, accuracy and a bigger tool die area that is able to deliver more added value at point of manufacture.”

Funded entirely through its own reserves, Brandauer tapped into its long-term relationship with Bruderer to purchase a BSTA 510-125B2 and the BSTA 280-75B2.

Both are industry leading high-speed fully automated power presses, with the latter so new the company will become one of the first in the world to have it installed and operational.

Dave continued: “This is a real show of intent and will illustrate to existing and new customers that we plan to offer them the very best level of service and manufacturing performance.

“Both of the presses feature the ground-breaking Bruderer B2 control technology and are fitted with high speed precision servo feeds for greater flexibility. The BSTA 280-75B2 is also able to offer up to 2000 strokes per minute, which is 100% faster than anything we currently have.”

He went on to add: “This investment gives us greater speed, greater accuracy and greater efficiency to target new industry sectors.”

The two high speed precision stamping presses have been ordered and will be delivered to the firm’s Newtown facility by April 2012.

Engineers from Bruderer UK will then be on hand to oversee the installation and train staff to get the maximum performance from the machines from day one.

“We’ve worked with Brandauer for more than 40 years and are delighted to be able to extend this working relationship even further with this latest acquisition,” explained Adrian Haller, Managing Director Bruderer UK.

“At £750,000, this is the largest order we have secured in our history and is a further indication that UK manufacturing is committed to being the best in the world.

“We will now work with David and his team to ensure that the installation process goes smoothly and the presses are up and running quickly. They will also benefit from our technical engineers – based in Birmingham – being on hand 24 hours a day in case of any issues.”

Rowan Crozier, Sales and Marketing Director, concluded: “It is part of our mission statement to offer customers world class performance and to do that you need to invest in the best machines, which is exactly what Bruderer provide.

“When this additional capacity is in place next year, we would expect turnover to break the £10m barrier and this will involve taking on five new members of staff to cope with the new orders.”

Brandauer, which is one of nine companies that make up MAN (Midlands Assembly Network), produces in excess of 4 million parts every week for customers in the automotive, aerospace, electronics, medical and alternative energy sectors. 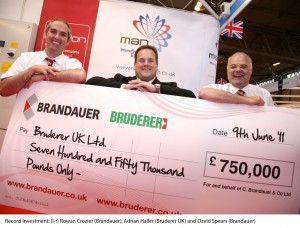 Brandauer will be celebrating it’s 150th Anniversary in 2012 and a number of special events will be held to mark the occasion. For more information don’t hesitate in contacting us on 0121 359 2822.

Made In The Midlands